Reducing Unconscious Bias in Your Organization: Contrast and Gender Bias 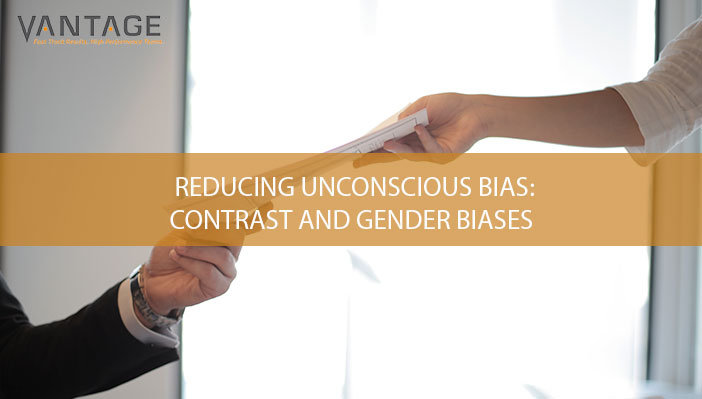 Selecting the right candidate is one of the most important decisions employers make. Yet, it’s very common when interviewing someone for a position to look for attributes similar to the employee who previously held that role. Are you making hiring decisions based on a quick comparison of a previous employee? Are you promoting people based on gender? Are you writing job descriptions that are driving away talent with unconscious gender bias?

Unconscious bias can influence more than just recruiting. It often impacts promotions, performance reviews and retention. To begin the process of preventing these biases and helping you build a more diverse and inclusive workplace, it is important to identify the biases that all too often impact candidates and hiring efforts in the workplace.

This is the fourth installment in a series of blogs we are sharing that define the 12 types of unconscious biases found in the workplace and tips you can use to avoid them when hiring and promoting employees. We have already written about affinity, confirmation, attribution, conformity, halo and horns biases in our previous posts. Today, we will define contrast and gender biases.

Contrast bias in the workplace occurs when you draw comparisons between candidates or employees that cause you to exaggerate the performance of one in contrast to another. This one may seem a bit confusing, but it is one of the most common types of bias in the workplace.

For example, when reviewing multiple candidate applications, it’s easy to find yourself comparing an application to the previous one, then using that to determine which one is better, rather than comparing each candidate to the actual needs of the role. Another example is when you have a great interview with one candidate then next one seem mediocre in comparison, even though the latter candidate may be well-suited for the role. You don’t want to fall into the trap of assessing who can submit the most flawless resume or make it through the interview without a stutter.

This also occurs during performance reviews when a manager compares an employee’s performance to other employee rather than to an established company standard. Instead, the focus should be on performance and development as it pertains to the key accountabilities of the role, rather than comparing or outperforming each other.

To avoid contrast bias, create a structured applicant review and interview process so the hiring managers can compare resumes and interview answers as apples-to-apples rather than apples-to-pears. When ranking people in the hiring process, be sure to consider the whole group and never rank someone based on just one comparison. This is also helpful in performance reviews by creating an objective performance standard. It should focus on whether or not the skills and effort of each employee meet the skills and attributes required for the job. This established benchmark will inevitably vary by role, but will prevent managers comparing employees to one to one another and against their own past performance.

Simply put, gender, or identity bias, is the tendency to prefer one gender over another. It has been no surprise that men are all-too-often given preferential treatment over women in the workplace. It often originates from our deep-seated beliefs about gender roles and stereotypes. In recruitment, gender bias can cause you to unconsciously lean towards a candidate based on their gender and the qualities you associate with it. Gender bias also occurs because we favor people that we can relate to, especially those of the same gender. We often connect with them more because of shared gender-specific physical and emotional experiences and this bias is most prominently visible within a professional setting.

To avoid gender bias, conduct blind screenings of applications that exclude aspects of a candidate that may reveal their assumed gender, like name and interests. Also, set diversity hiring goals to ensure your company holds itself accountable to equitable hiring practices. Additionally, make sure to compare candidates based on skill and merit rather than traits that can cloud your judgement of them.

As shared in the previous blog posts, it is important to benchmark positions when hiring and promoting by assessing talent and comparing assessments back to the benchmark. Committing to implement consistent, actionable procedures and tools that create the necessary objective lens to support talent-related decisions is critical. Doing so will help you avoid these biases and create the appropriate accountability measures to lead your organization towards a more diverse and inclusive workplace.

In our next blog, we will look at age and name biases.