Reducing Unconscious Bias in Your Organization: Attribution and Conformity Biases 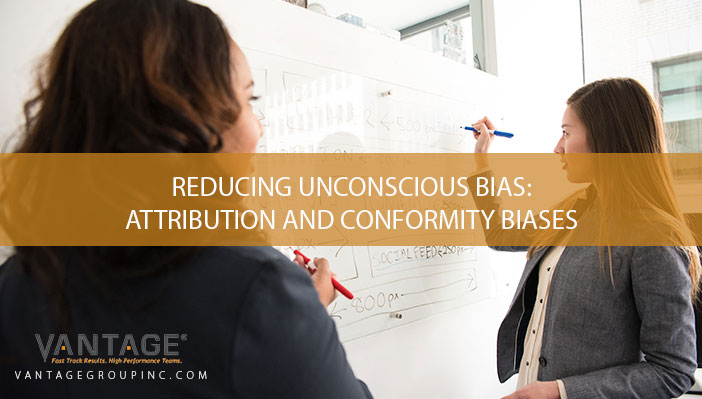 Are you hiring because of a “gut feeling?” Are you promoting people much like yourself? Are you steering people of certain genders and races into jobs because you associate those particular jobs with those groups of people? Are you hiring people because you, “just really like them” rather than because they have exhibited the best skills and qualifications for the job?

If you are doing these things, you and your organization are likely succumbing to unconscious bias in your processes of recruitment, hiring, development and retention of employees. To begin the process of preventing these biases and helping you build a more diverse and inclusive workplace, it is important to identify the biases that often impact candidates and hiring efforts in the workplace.

This is the second in a series of blogs we are sharing that define the 12 types of unconscious biases found in the workplace and tips you can use to avoid them when hiring and promoting employees. We have already written about affinity and confirmation bias, now we will define attribution and conformity bias.

Attribution bias is where you attempt to make sense of or judge a person’s behavior based on prior observations or interactions you may have had with an individual.

While this may seem harmless on the surface, it is human nature to quickly judge or falsely assume things about a person without knowing the whole story. We have a tendency to tell ourselves a story about an individual to mentally fill in the blanks to explain how or why they react a certain way. Additionally, more times than not, we write a negative story in our heads rather than a positive one. As Shakespeare said, “There is nothing good or bad but thinking makes it so.”

Attribution bias can cause hiring managers to assume a candidate is unfit for the job because of something unusual on their resume, an unexpected response to an interview question, or an interaction or observation you may have had previously with the candidate in your workplace. To avoid attribution bias in decisions, it is important to work with facts instead of assumptions.

For example, instead of assuming a candidate is unfit for a job because they have a gap in their resume, ask them about the gap. It could be innocent or unprecedented. It is always important to operate from curiosity by asking questions instead of drawing conclusions or pigeon-holing. Give candidates a chance to share their full story before you draw conclusions.

Conformity bias, in its simplest form, is the same as peer pressure. This can occur as a hiring team gets together to review an applicant’s materials or conducting interviews.  Conformity bias can cause individuals to be swayed by the opinions of the majority of the people on the team. The problem is the majority may not always be right and the loudest voices are the only ones that get heard. You run the risk of missing out on excellent candidates because individual opinions have overtaken facts.

To avoid conformity bias, it is important to introduce real structure to all interviews by asking specific questions relating to the job. Those questions should be the same for each position so that answers can be compared between candidates. Additionally, a structure like this can reduce the risk of a lawsuit since you’re treating each applicant the same. It is always best to combine this with a job benchmark to provide an objective lens on capabilities required by the role as opposed to what you think you need.

Next, recognize the risk of bias in the interview process by having at least three people interview each job candidate. For minor positions, it may be two different people; for major positions, you may need to bring in as many as four or five interviewers. Once those interviews are complete, each interviewer should write down and submit their individual ratings and opinions separate from the group immediately after interviews are completed. This avoids group discussions where people can be pressured to change their minds.

Set up a weighting scale – for example: benchmark 40%, relevant or transferable experience and accomplishments 30%, interviews 25%, and education and training 10%. This scale will assess your organization’s risk with this hire.

Committing to implement consistent, actionable procedures and tools that create an objective lens to support talent-related decisions is critical.  Doing so will help you reduce these biases and create the appropriate accountability measures to decisions that helps your organization build a more diverse and inclusive workplace.

In our next blog, we will look at halo and horns biases. Have you and your company made bold statements of commitment to reducing bias in your organization and don’t know how to put actions to your words?