Reducing Unconscious Bias in Your Organization: Beauty and Height Bias 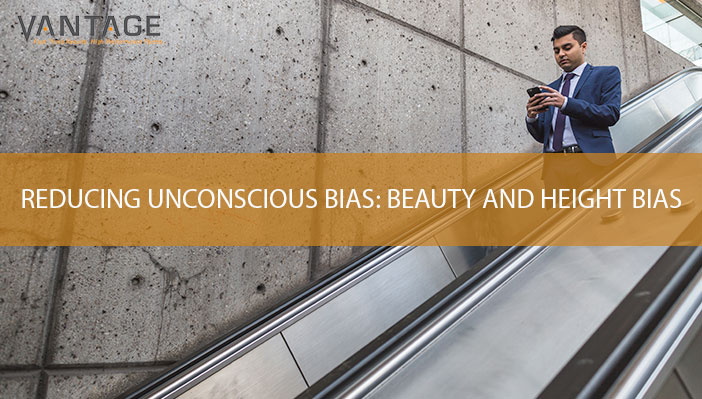 Even in an enlightened culture with many guidelines and rules to prevent bias, there are many biases that influence hiring and promotion decisions in the workplace. This has resulted in an unfair advantage that some groups of people have over others.

We have discussed several of these biases in our previous blogs and other publications, but one of the most prominent biases is hardly ever discussed or acknowledged, namely the biases related to how someone looks. The existence of a beauty or height bias in the labor market is well documented. According to this study, “Physically attractive individuals are more likely to be interviewed for jobs and hired, they are more likely to advance rapidly in their careers through frequent promotions, and they earn higher wages.”

This bias shows up in common manifestations of appearance bias such as biases against obese, oddly-dressed, candidates with tattoos or anyone who doesn’t fit societal norms for appearance. Few employers will admit to this bias, but there are some companies that openly practice it. For instance, the $50 million settlement that Abercrombie & Fitch was pushed into paying for hiring “all American-looking” retail assistants. They weren’t banned from imposing attractiveness standards in its recruitment policies, so long as they recruited diverse—but good looking—candidates.

Another appearance bias that influences hiring and promotions is related to height.  Apparently, every inch counts when it comes to earning potential in the workplace. Findings in the Journal of Applied Psychology suggest that someone who is six feet tall earns, on average, nearly $166,000 more during a 30-year career than someone who is five feet, five inches.

The good news is identifying these biases are very simple. What it boils down to is any employer interested in wanting to eliminate these appearance biases, whether it is beauty or height related, should be able to detect this bias and evaluate the advantages of eliminating it. The bad news is you are unlikely to achieve this unless you replace human intuition with data.

As we have shown in the previous blogs, unconscious bias can influence more than just recruiting. It often impacts promotions, performance reviews and retention. To begin the process of preventing these biases and helping you build a more diverse and inclusive workplace, it is important to identify the biases that all too often impact candidates and hiring efforts in the workplace.

This is the sixth and final installment in a series of blogs we are sharing that define the 12 types of unconscious biases found in the workplace and tips you can use to avoid them when hiring and promoting employees. We have already written about affinity, confirmation, attribution, conformity, halo and horns biases,  contrast and gender biases, and age and name biases in our previous posts. Today, we will define beauty and height biases.

Beauty bias in the workplace is a social behavior where people believe that attractive people are more successful, competent and qualified.

To avoid beauty bias, companies should create structured recruiting and interview processes so that your team will be able to compare applications and interviews equally and reduce the risk of bias. Having an initial phone screening rather than a video call or in-person interviews can also help as well as utilizing unbiased benchmarking and assessments related to the role that is being hired.

Height bias is the tendency to judge a person who is significantly shorter or taller than the socially-accepted human height.

This may seem a bit hard to believe, but numerous studies confirm that height can have a direct impact on roles and earning potential. Another study found that tall candidates are perceived as more competent, employable and healthy, which may explain why 58% of male CEOs at major companies are over six feet tall.

To avoid height bias, conducting blind interviews, phone interviews or video interviews will reduce your susceptibility to judge a person based on their height. Also simply knowing that this bias is a common social behavior will help you identify your bias against candidates.

Identifying bias in your recruiting and promotion process is something that has to be constantly scrutinized. Are you using language in your job descriptions that contains bias? Is your organization valuing people with certain looks over others when it comes to promotions? How are resumes being screened? Is bias creeping into decisions? Is the unconscious bias in your organization excluding top talent?

As shared in the previous blog posts, it is important to benchmark positions when hiring and promoting by assessing talent and comparing assessments back to the benchmark. Committing to implement consistent, actionable procedures and tools that create the necessary objective lens to support talent-related decisions is critical. Doing so will help you avoid these biases and create the appropriate accountability measures to lead your organization towards a more diverse and inclusive workplace.