Reducing Unconscious Bias in Your Organization: Age and Name Bias 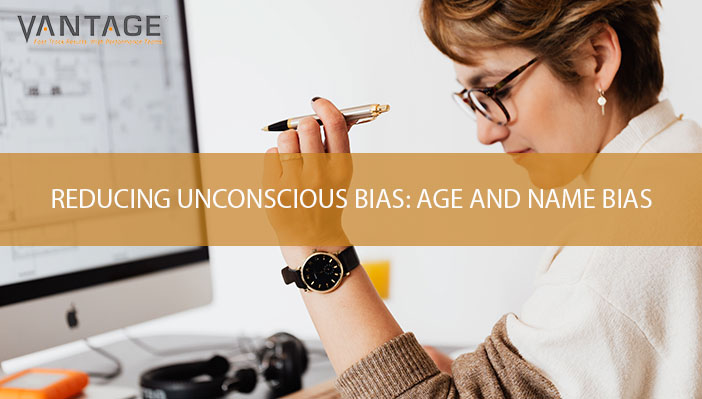 Selecting the right candidate for an organization continues to be a challenge when matching the candidate’s skills with what the role needs. You may even notice a shift from the words used in job descriptions such as “experienced” and “seasoned,” to words like “high-potential” and “energetic.” Many companies put a premium on “high-performers” with “proven experience,” and are continually looking for “digital natives” in the age of online technology.

But don’t be fooled, these terms point to a very subtle age bias. It is one of the most common forms of bias and has resulted in numerous age discrimination lawsuits,.

It’s not just age, however, that can have an impact on the hiring process.

Whether your resume lists Ruby or Rudabah, Michael or Mohamed shouldn’t matter — as long as the person’s skills match the job. However, while this sounds good in theory, plenty of research has shown resumes featuring female names are less likely to lead to an interview or a job, and the same goes for non-Anglo names as well.

Unconscious bias can influence more than just recruiting. It often impacts promotions, performance reviews and retention. To begin the process of preventing these biases and helping you build a more diverse and inclusive workplace, it is important to identify the biases that all too often impact candidates and hiring efforts in the workplace.

This is the fifth installment in a series of blogs we are sharing that define the 12 types of unconscious biases found in the workplace, and tips you can use to avoid them when hiring and promoting employees. We have already written about affinity, confirmation, attribution, conformity, halo and horns biases, and contrast and gender biases in our previous posts.

Today, we will define age and name biases.

Age bias in the workplace is the tendency to have negative feelings about another person based on their age.

Age bias, especially at American companies, affects older people more often than younger people as 58% of workers start noticing age discrimination when they enter their 50s. At that point, it can be difficult to change careers, find another job or move up in their careers because employers tend to value younger talent more and more—even though experience and expertise are critical skills for any successful business.

To prevent age bias, it is important to train your team members to understand the issues related to age bias and address the myths associated with workers of different ages. Older people can be stereotyped as slow and lacking energy. But younger people get misjudged too. Older people can perceive them as lacking experience and not having patience to “learn the ropes.” Your company should also create policies that prevent age bias along with hiring goals to keep age diversity top of mind when recruiting new talent.

Name bias is the tendency people have to judge and prefer people with certain types of names and typically names that are of Anglo origin.

This is one of the most pervasive examples of unconscious bias in the hiring process, and the numbers bear it out. The National Bureau of Economic Research found that white names receive 50% more callback for interviews than African American names. Another study found that Asian last names are 28% less likely to receive a callback for an interview compared to Anglo last names.

To avoid name bias, the solution is simple. Omit the candidate’s name and personal information, like email, phone number and address, from their application materials. You can either do this by assigning candidates a number or have an unbiased third-party team member omit this information for the hiring team until they bring a candidate in to interview. This will ensure hiring teams are selecting candidates based on their skills and experiences without the influence of irrelevant personal information.

Identifying bias in your recruiting and promotion process is something that has to be constantly scrutinized. Are you using language in your job descriptions that contains age bias? Is your organization valuing certain age groups over others when it comes to promotions? How are resumes being screened? Is name bias creeping into decisions? Is age bias eliminating top talent?

As shared in previous blog posts, it is important to benchmark positions when hiring and promoting by assessing talent and comparing assessments back to the benchmark. Committing to implement consistent, actionable procedures and tools that create the necessary objective lens to support talent-related decisions is critical. Doing so will help you avoid these biases and create the appropriate accountability measures to lead your organization towards a more diverse and inclusive workplace.

In our final blog about unconscious bias, we will look at beauty and height biases.